Our Top 5 Most Collectable Speedmaster Models

When it comes to iconic watches, few can rival the Omega Speedmaster. First launched in 1957, there is still a version of the Omega Speedmaster available that highly resembles the original. Early models had cases with straight lugs and were only around for a few years. However, Omega recently revived this design for select models, including the re-release of the steel Speedmaster with the legendary caliber 321.

Looking around the watch world, you will quickly realize that no single timepiece has a more impressive history than the Omega Speedmaster. This watch is still going strong and now comes in many different materials and designs. In this article, we want to highlight a few Speedmasters that stand out from the crowd and may be of particular interest to collectors. 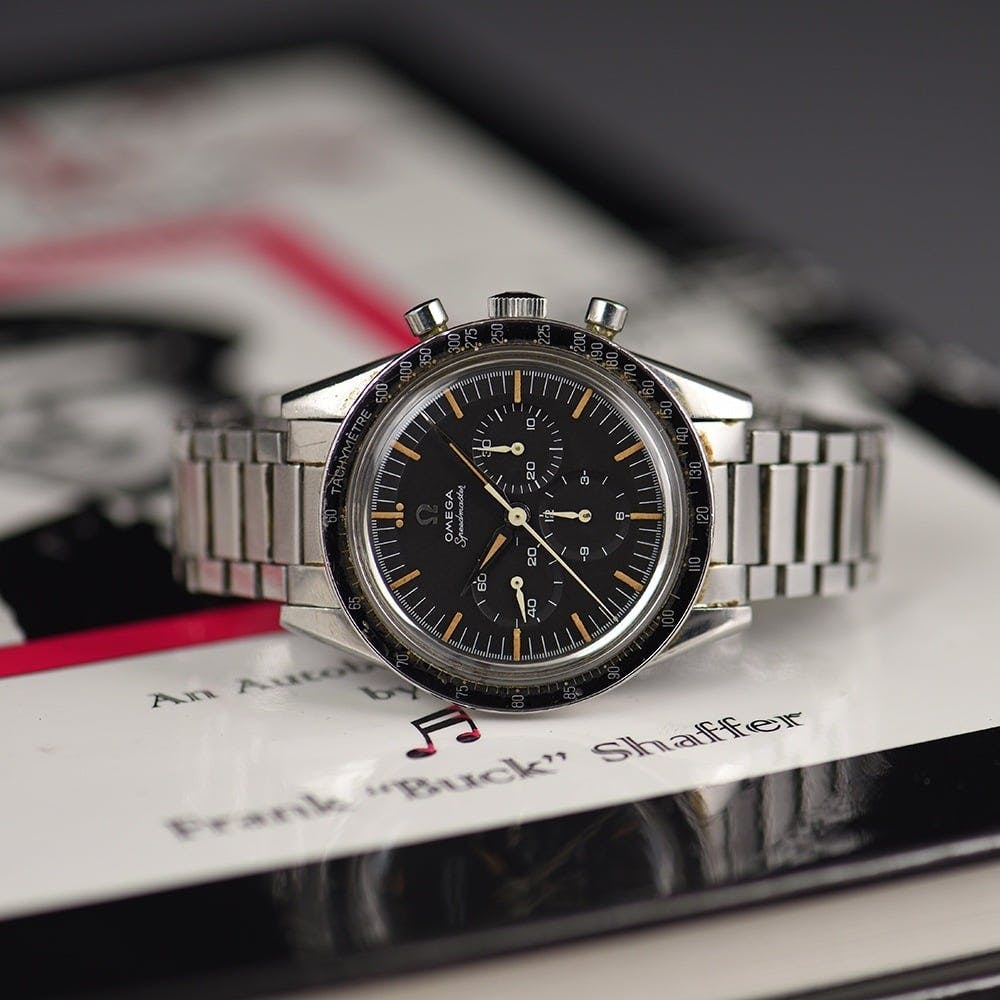 While the original Speedmaster with the reference CK2915 debuted in 1957, the first one to be launched into space was the CK2998 from 1959. This particular watch was brought along as a personal belonging of American astronaut Wally Schirra. However, it wasn’t until 1965 that NASA would choose the Speedmaster as the official watch for their manned space program. The CK2998 came in several slightly different versions. Each has a sub-reference ending in a number from 1 to 6 or 61/62.

All of these models are pre-“Professional” and feature the Omega brand name on the dial, just below the applied logo, with Speedmaster written below that. They all have Alpha hands, and the most sought-after versions come with the rare “lollipop” chronograph second hand. The case of the 2998 has straight lugs with a width of 19 mm. This edition also lacks a crown guard, and its case back features a double step and an engraving of a seahorse and the word “Speedmaster.” Inside, you will find the iconic caliber 321. Finally, the bezel has the classic DON (or “dot over ninety”) design.

This was the last vintage Speedmaster to feature the straight lugs. The reference 105.003 was in production between 1963 and 1965, although some individual pieces are known to have been delivered as late as 1969. While the logo is still an applied one, this reference comes without the word “Professional” on the dial.

It was this watch that Ed White wore on his historic spacewalk during the Gemini IV mission. For this reason, the reference is also known as the “Ed White” Speedmaster. In some instances, this model can also be found with the reference 145.003, which can be a bit confusing, especially since nearly all of them have “105.003” stamped on the inside of the double-step case back. 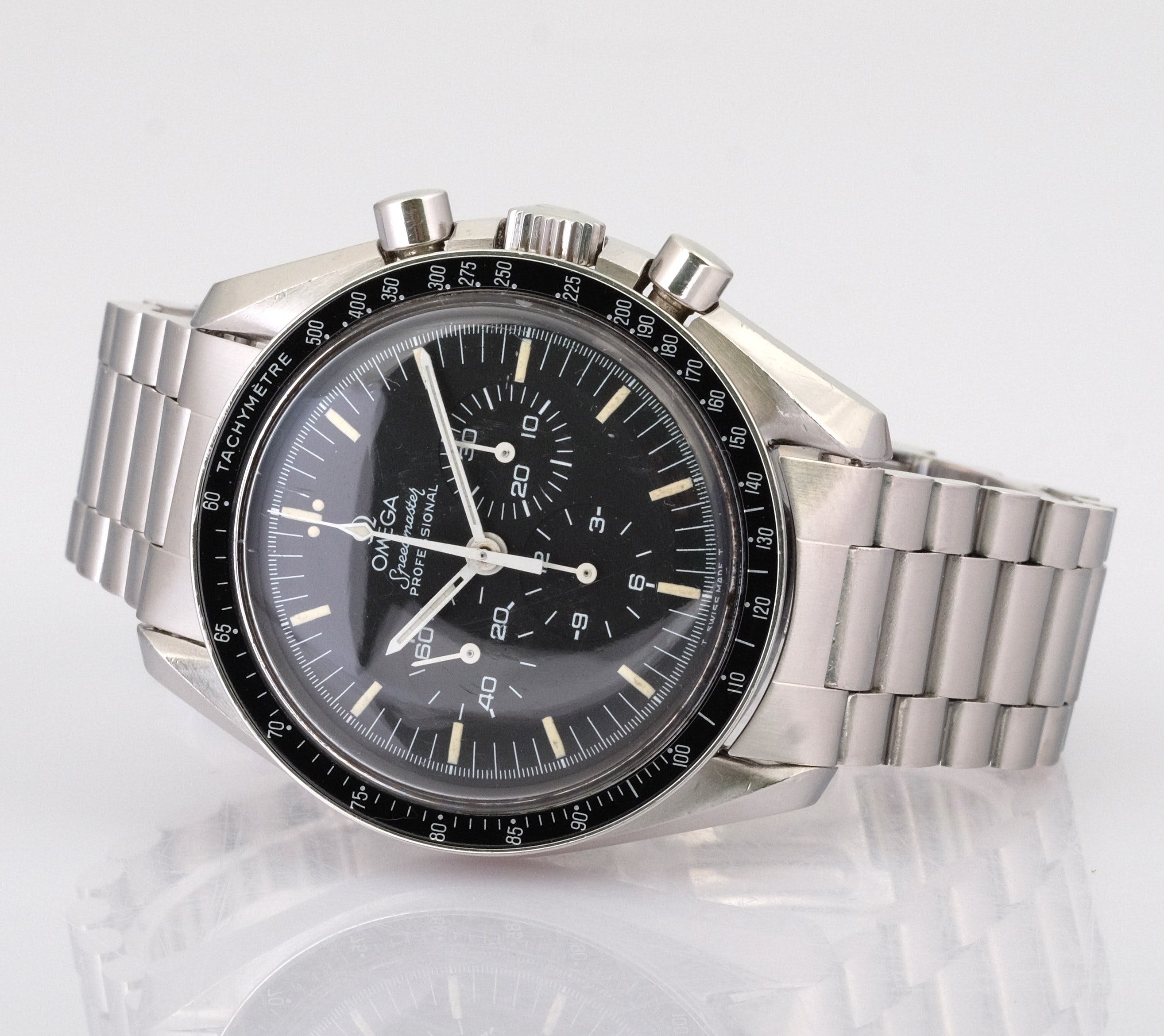 For those who want to add a vintage Speedmaster to their collection without breaking the bank, the Speedmaster 145.022 is probably the best choice. This model came out after the 145.012, which was the last Speedmaster to feature the caliber 321. Although the 145.022 comes with the newer caliber 861, it still ticks all the boxes when it comes to the look and feel of a vintage Speedmaster, especially the earlier models with a stepped dial. That’s one of the details that I feel makes vintage Speedmasters truly stunning – and something that gradually disappeared in later versions.

Although it’s very rare, some of the first models of this watch have an applied logo on the dial. This is likely the result of Omega using up some parts they had leftover in the workshop. All dials bear the mark “T Swiss Made T” at the bottom. This means that the luminous material used was tritium, which sadly loses its effectiveness over time. 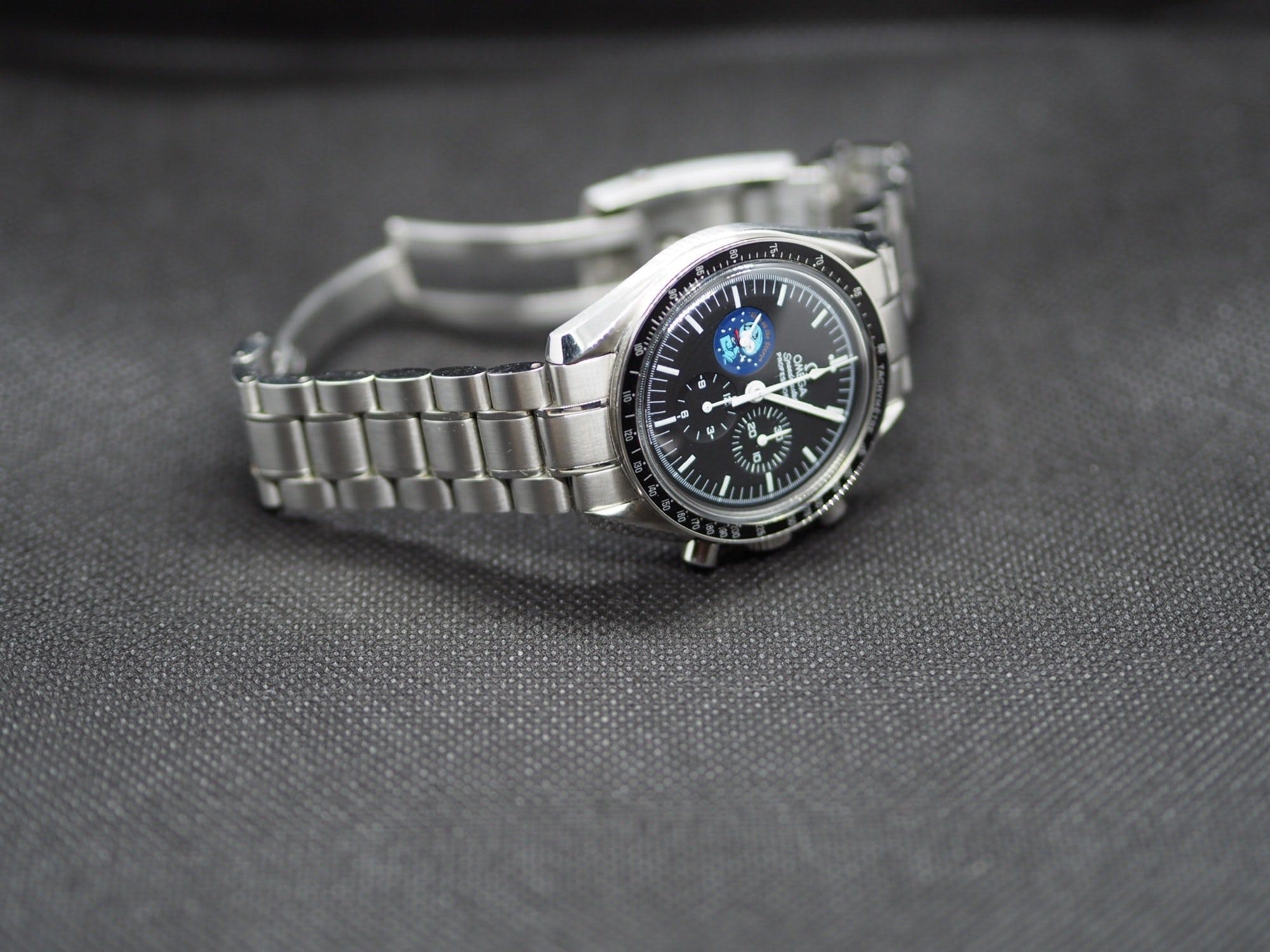 The Speedmaster Snoopy raises some questions, so I’ll give a brief explanation. NASA chose the cartoon dog Snoopy as a symbol to promote awareness of flight safety, crews, and missions back in 1968. In 1970, the Speedmaster garnered the Silver Snoopy award for its crucial role in the return of Apollo 13. To commemorate this milestone, Omega launched the Speedmaster Snoopy in 2003. It had a limited run of 5,441 pieces, which is a reference to the minutes and seconds of the elapsed mission time.

Basically, the Speedmaster Snoopy is a standard Speedy with a depiction of Snoopy with the text “Eyes on the Stars” on both the subdial at 9 o’clock subdial and the case back. Although it didn’t sell too well at first, the Snoopy is now highly sought after. 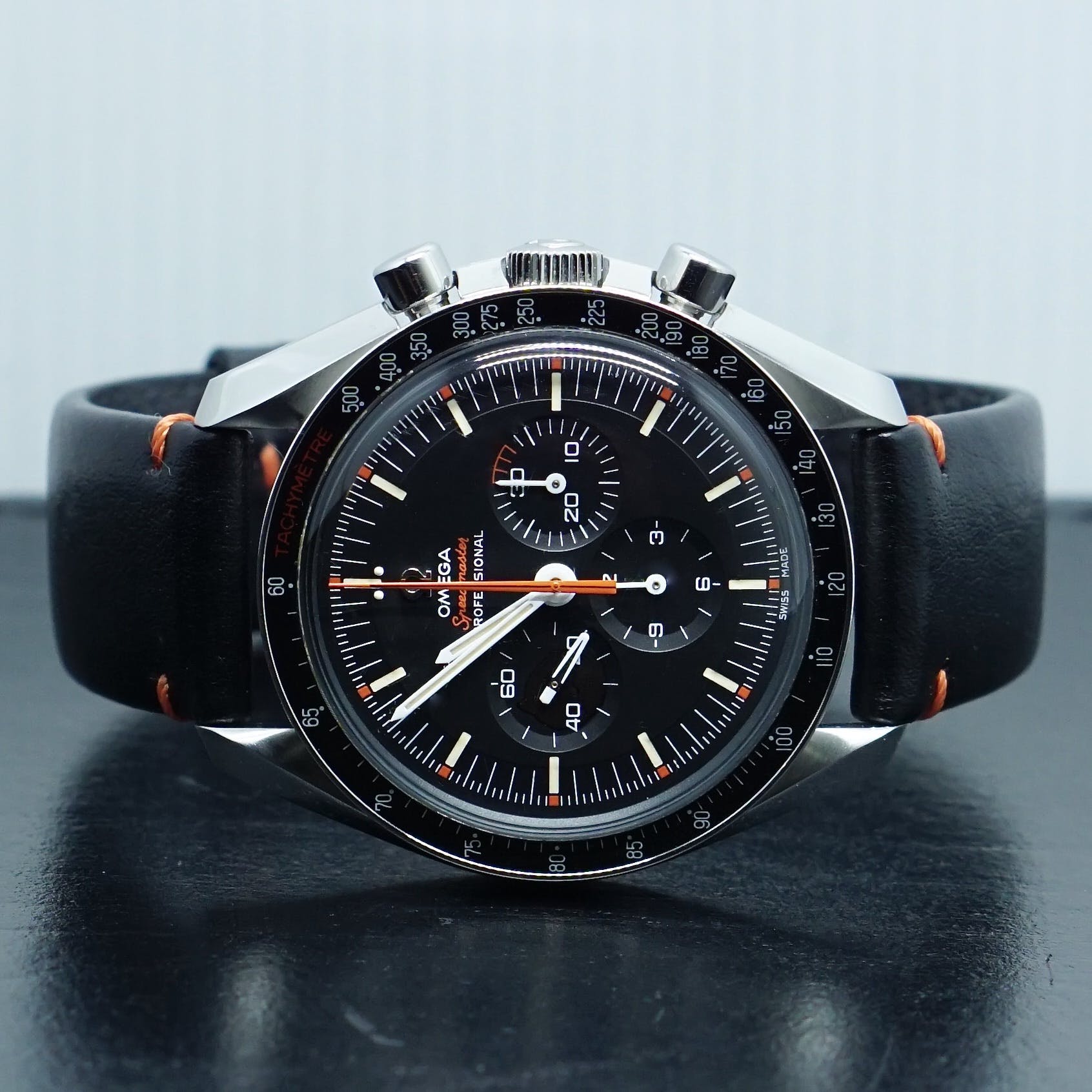 Released in 2018, the Speedy Tuesday Ultraman is the most recent of the watches selected for this article. Just like the Snoopy, it is a limited edition. This Speedmaster is limited to 2,012 pieces, based on the year in which the founder of Fratello Watches first used the hashtag “Speedy Tuesday.” It was inspired by the Speedmaster Ultraman with an orange chronograph seconds hand, as seen in the Ultraman series back in 1967.

Although it is a modern Speedmaster, the watch features some nice details like an old-style Omega logo on the crown and buckle and the iconic “DON” bezel. It has several components that directly correspond to the vintage Ultraman, such as the orange chronograph hand and the small squares above the hour markers. On the chronograph minute subdial, the first three markers are orange because, in the series, Ultraman could only exist in Earth’s atmosphere for three minutes before running out of energy. A hidden orange detail can be found on one of the subdials with the help of a UV light source.

As I mentioned at the start, the Speedmaster’s history is one of the richest in the entire watch world. Because the timepiece has gone through so many variations over the years, there’s bound to be one that suits your style and budget. Whether you’re looking for a vintage watch or something more recent, the Speedmaster offers a piece of horological history for your wrist. Just make sure that you do your homework when it comes to vintage watches, especially if you want an accurate timekeeper. There is a lot of information out there, and gathering knowledge is part of the fun. Be aware that over time, watch components have to be replaced, and this can impact their value. This is especially true of the older watches.

The History of an Icon: The Omega Speedmaster

Three Watches Under $6,000 With Good Value Retention (That Aren’t Rolexes)

I worked in real estate for 15 years. Over the last few years, I've turned my passion for watches and photography into a career. My interest in watches dates back …